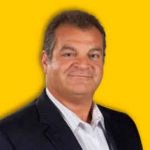 The awards program recognizes high-growth entrepreneurs who demonstrate excellence and extraordinary success in such areas as innovation, financial performance and personal commitment to their businesses and communities. These finalists were selected by a panel of independent judges. Award winners will be announced at a special gala event on Thursday, June 13, 2013 at the Hyatt New Brunswick.

Pete was surprised and excited to learn about being named a finalist for such a prestigious award. He’s had the entrepreneurial bug for many years and has started or been a part of a founding team for five startups in the last 16 years.

Seeking a Level 1 IT Technician for the PTS Team

Have You Made the Move to Wireless Monitoring?